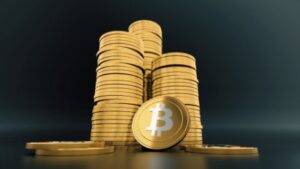 Why do young investors prefer cryptocurrencies? Or, to put it more plainly, why do young people like crypto speculation? In the public eye, the phrase “crypto speculation” is often associated with negative implications such as “radical”, “high-risk”, and the “ambition” for getting rich. However, the preference for cryptocurrency among the young seems to be unstoppable. According to the latest report released by Crypto.com, in January 2021, there were 106 million crypto holders worldwide, and the figure has surged to 221 million by August 2021, compared to only 66 million in May 2020. The doubling of holders during six months shows just how popular cryptocurrencies are. 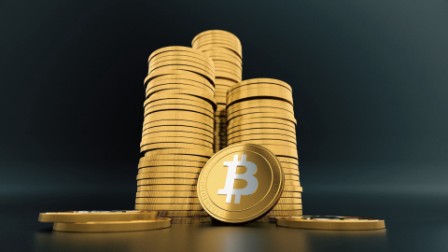 Why is this the case? The elder always tell young people to be patient, but what they don’t realize is that if young folks took the advice, they may never get the same returns, no matter how hard they work.

Here is a real-world example. During the past 20 years, house prices in China’s first-tier cities skyrocketed. For example, in Shenzhen, the average house price back in 2001 stood at RMB 5,500, which soared to RMB 60,000 twenty years later. On the face of it, the more than ten-fold growth spread over 20 years does not seem so impressive, but real estate investment is not simply buying and waiting. In 2015, house prices in Shenzhen grew by 40%, that is, within 12 months, a house originally valued at RMB 2 million is now worth RMB 2.8 million. Moreover, a house purchase is almost always leveraged, generally with a down payment of only 30%. In other words, the buyer only pays RMB 600,000 principal plus 12-month mortgage payments of less than RMB 700,000 in exchange for a two-million-yuan house which is now worth RMB 2.8 million. According to this calculation, the buyer makes a profit of 114%, instead of merely 40%. Yet, this is not the end of the story.

Easy real estate credits allowed these profit-makers to buy more houses by re-mortgaging their house for more loans (the price increase and the down payment) from the bank. Now, the buyer now only bears a loan of RMB 1.4 million for the RMB 2.8 million house. Through other channels, the buyer could borrow another RMB 1 million from the bank to buy a three-million-yuan house. In 2016, house prices in Shenzhen increased by another 20%.

By now, the buyer originally with a principal of RMB 600,000 owns RMB 6.8 million in real estate assets. Here is a rough calculation of his profit: Deducting the RMB 1.4 million mortgage (the first house) and the RMB 3 million loan (the second house), the buyer stands to make an earning of RMB 2.4 million, a 400% surge in two years. Though it sounds exaggerated, that was exactly what countless buyers and investors did during the last two decades of sustained real estate boom in China’s first-tier cities. Further, the surge in 2020 once again doubled the property price. Who says returns are always proportional to the risks?

In the face of sky-high house prices, young people living in first-tier cities may never afford to buy a house, let alone invest in one. When house prices rise, all profits will be reaped by big investors.

Apart from China’s real estate market, the same also applies to the US stock market. In the past century, old money has made huge profits in the US stock market. During the same period, the market also witnessed the rise of Warren Buffett. Can there be another Warren Buffett in the 21st century? Almost impossible. Essentially, the so-called winning track and rules for success are nothing more than dividends offered by a specific historical period.

Data is often the most authentic and reliable evidence. According to statistics from AssetDash, the 2021 market cap rankings of global assets are as follows: 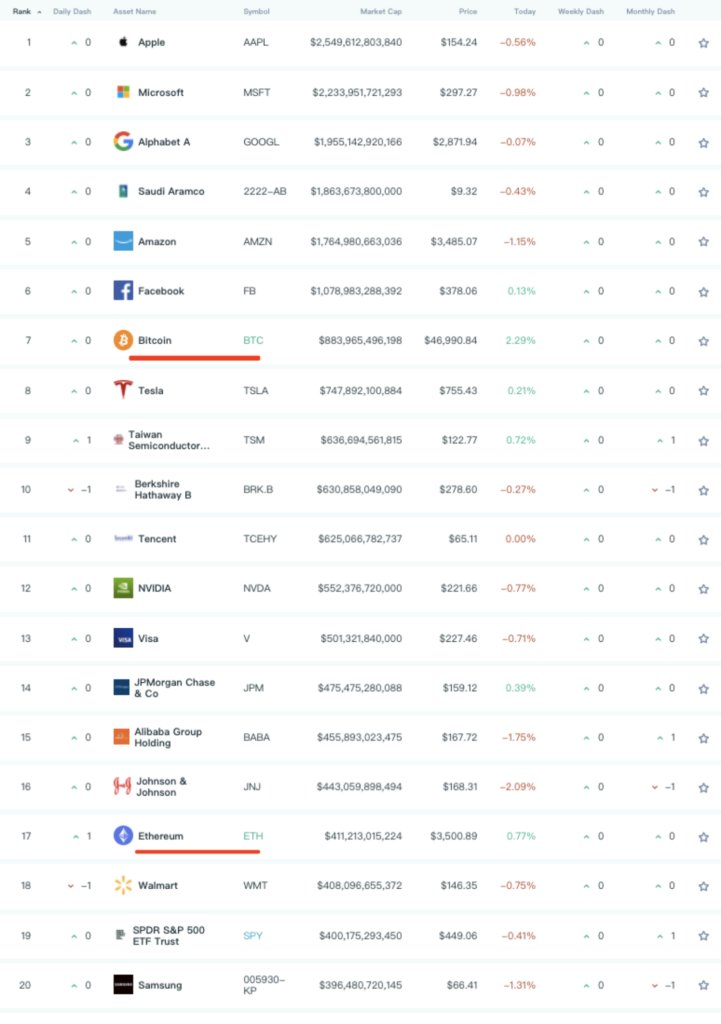 As can be seen, Bitcoin ranked as the 7th most valuable asset, beating the young electric vehicle maker Tesla and the 20-year-old Chinese Internet titan Tencent. In comparison, it has only been 12 years since the creation of Bitcoin.
Established in 2015, Ethereum ranked among the top 20 with a market cap of more than $411 billion. It only took the crypto platform 6 years to outrank the global retail giant Walmart.

See also  Bitcoin For Beginners: What Is Bitcoin & How To Get Started With Bitcoin in 2021

Other than the market cap, there are also rankings of the annual return of the major global assets in the past decade: 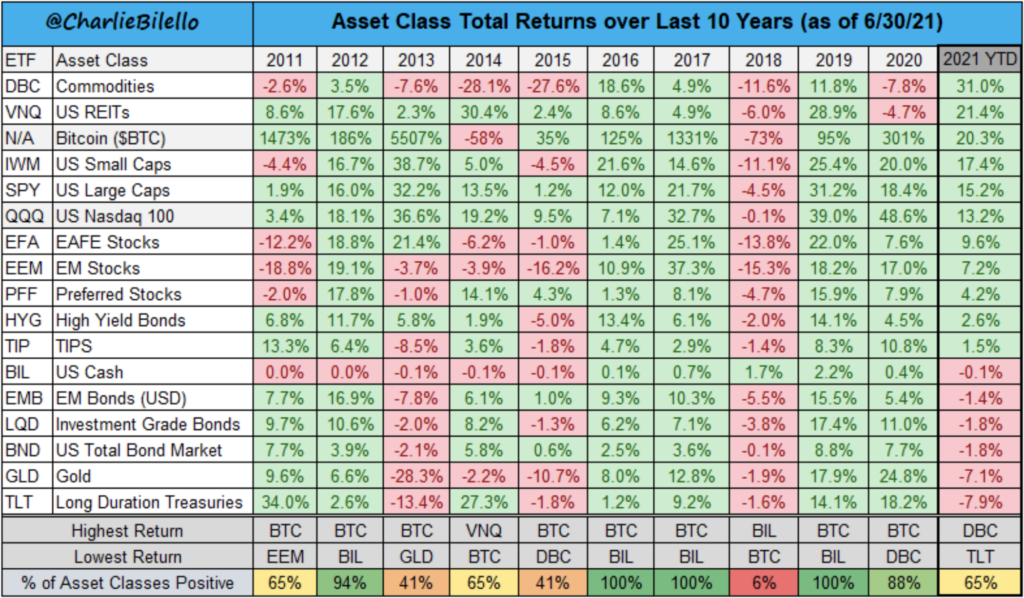 Bitcoin shot up by 5,500% and 1,300% in 2013 and 2017, respectively. In addition to the staggering annual growth, the 10-year performance of Bitcoin is equally impressive: In 8 years, Bitcoin topped the global investment markets with yields leaps and bounds ahead of all other assets. This cryptocurrency is slightly inferior to the large-cap stock market indexes and the Nasdaq 100 index of the United States only in terms of “no-loss” years and drawdowns. As for gold, the global safe-haven asset, you can barely find its name on the above list.

If you are still not convinced, let us look at the compound growth rate. As the world’s most valued stock, Apple is probably the finest listed company. Still, how did Apple perform in terms of the compound growth rate? On December 12, 1980, Apple went public. The market cap was $1,778 million at the end of its first day of trading. Since then, Apple’s market cap has grown to $2,655.2 billion as of September 9, 2021, which translates to a 40-year compound growth rate of 19.94%. As the ultimate beneficiary of America’s prosperity and the stock market boom, Warren Buffett frequently records the highest return among all investors. Similar to Apple, his compound annual growth rate stands at 20%. This means that in the conventional mainstream investment markets, the compound annual growth rate achieved by the best investor of the world’s greatest listed companies goes no higher than 20%.

In the crypto space, the compound growth rate of the most valued token Bitcoin stood at over 200% in the past 12 years, which is more than 10 times that of investments in listed companies.
From these data, higher returns are clearly why young investors prefer cryptocurrencies to the traditional mainstream investment market.

All content is copyrighted to their respectful owners unless stated otherwise. This website is not associated with any external links or websites. Subtitleseeker.in ©2021